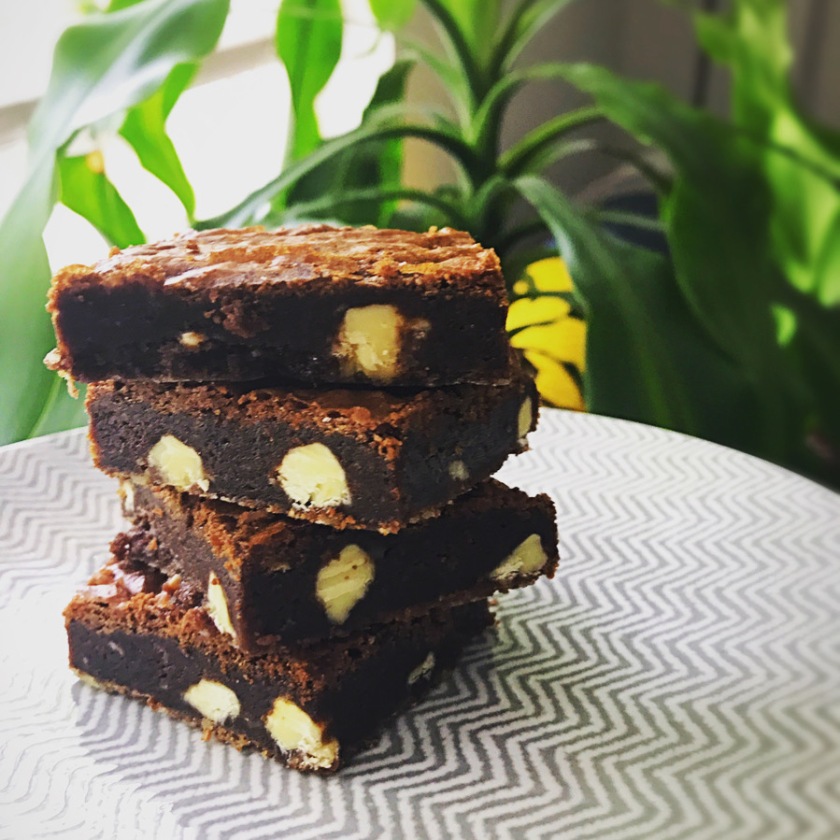 Where do I start with these. These are my favourite thing to bake. If you ask anyone I know what their favourite thing that I bake, they’ll say these. And I agree. Again, I might be bias – but they’re bloody good brownies. And there’s a story behind them.

As a child, I loved baking – I used to bake butterfly cakes and chocolate fork biscuits from my Mum’s Mary Berry cookbook. Absolute classics. And then I got my first ‘Children’s Cookbook’ and I’m pretty sure, I only ever used it for one recipe – brownies.

Paul Hollywood used to live in the village where I grew up & the village church were hosting a fundraiser for a new roof – he got stuck in and helped raise some money; giving a talk about his career and the secrets of GBBO (v.interesting!) and holding a bake off in the village hall with the one and only, Mary Berry. Obviously I had to enter.

I grew up in a small village – everyone knew everyone, but nothing really ever happened. Having Paul Hollywood as a resident, was as exciting as it got. So our expectations of the bake off were low – maybe a handful of people would enter? But then they announced the prize was a Kitchen Aid. Then it stepped up a notch. My sister became my competition with her famous carrot cake (a recipe for another day) and I got going with my brownies.

It turned out being a lot more popular than we’d expected – and my little cake tin of brownies looked very out of place next to a table full of beautifully decorated tiered cakes – someone had recreated Will & Kate’s wedding cake with a picture of them drawn on the top tier….. I was way out of my league..

They’d only been able to get a 1st & 2nd place prize donated so there was no 3rd place – but I was awarded a signed certificate from Mary Berry & Paul Hollywood to say that if there had of been a 3rd place, my brownies would have had it! When 1st place went to Will & Kate’s wedding cake….I’ll take that.

I want it framed and given centre stage in our kitchen, but Mike’s not so sure….

I guess I should stop rambling and give you all the recipe, right? There’s been a few changes over the years and I’m pretty sure I’d get at least 2nd place now… Enjoy!

ps. No normal person can wait until the next day for their brownies – I’m guilty of taking a spoonful of the gooey mix straight from the oven and having it with ice cream and then if I still can’t wait I’ll pop them in the freezer!